THE FOLLOWING story, which dates from 1909, demands a little background. As it appeared in Motor Cycling it’s no surprise that a motorcyclist saves the day. But what was a military fantasy doing in a bike mag? Jumping on a bandwagon, that’s what. ‘England Invaded’ stories had appeared by the hundred since the 1870s, no doubt inspired by the way the Prussians had given the French such a swift kicking in the Franco-Prussian war. (Some of the best of these tales were collected in  Michael Moorcock’s excellent anthologies, England Invaded and Before Armageddon.)
George Tomkyns Chesney’s The Battle of Dorking was a particularly dark example (we lost) – HG Wells’ 1898 seminal War of the Worlds was  a remake with Martians replacing Germans (we lost, until the Martians caught colds).

The Invasion of 1910 was a 1906 novel written mainly by William Le Queux (with HW Wilson providing the naval chapters) which preached the need to prepare for war with Germany. The novel was commissioned by Alfred Harmsworth as a serial which appeared in the Daily Mail. London newspaper vendors were dressed as Prussian soldiers complete with pickelhaube helmet and placards showing maps of where the ‘invaders’ would be next day–the story was even amended to feature towns and villages with large Daily Mail readerships. The Invasion of 1910 was translated into27 languages; sales topped a million. The idea for the novel is alleged to have originated from Field Marshal Earl Roberts, who regularly lectured English schoolboys on the need to prepare for war. 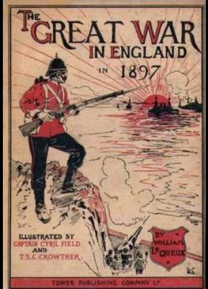 To Le Queux’s understandable dismay, a pirated and abridged German translation (with an altered ending) appeared the same year: Die Invasion von 1910: Einfall der Deutschen in England. This wasn’t the first change, mind you. Le Queux’s book was originally published as The Great War in England in 1897 with France as Britain’s  implacable enemy. In this version German soldiers land in Britain to help repulse the French invasion and are welcomed as saviours.
In 1903 Erskine Childers published The Riddle of the Sands: A Record of Secret Service, a rattling good yarn which also portrayed the Jerries as the bad guys (the 1979 film is worth a look).
Moorcock’s title Before Armageddon reflects the sobering fact that within a few years of being inspired by such tales of derring do, a generation of young men were to discover the horrors of mechanised warfare.
Enough of the background. Make yourself a cuppa and settle down for a rattlin’ good yarn…

IN TOUCH WITH THE INVADERS
Some Thrilling Episodes, Showing the Possibilities of the Motor-bicycle if this Country were Invaded.

The following wireless message was received at the War Office on the 30th July 1916: “Sandyness Bay, Sunday 30th July, 1916. Time, 4.25am. Fifteen thousand foreign troops with all impedimenta landed this morning one mile west of above point. All telephone and telegraph wires cut in neighbourhood. Foreign fleet with transports are anchored within 500 yards of coast. Sea calm, slight fog.”
Motorcyclist Jones of the Kent Cyclist Battalion, who had finished the remaining drops from a tin of ‘Shell’ into the tank of his twin, screwed down the cap and threw the empty can into the corner of the garage. He had heard the news of the landing of the enemy from his drill-instructor, whilst the British fleet were executing some elaborate manoeuvres in the Irish Channel.
Shortly after Jones was speeding round the town, regardless of red triangles, to the homes of his comrades, warning them to appear at the drill hall at 7am. Dress, full marching order, water bottles filled, rations for 48 hours, rifles and capes on machines, blanket and waterproof on cycle carrier. Thus Jones rode like fury, for as a trained military cyclist he knew that time was very precious. It took him just under an hour to complete his work of alarm. Arriving again at the drill hall he reported himself to his instructor to await further orders. So, after despatching several telegrams to his company’s officers, Jones returned home to complete his own equipment.
Monday, 7am – all was hustle and bustle at the hall. Everybody was as keen as mustard and anxious to be in touch with the enemy who had so audaciously stolen a march on old England at such a critical time. The roll-call numbered six officers, 12 motorcyclists and 380 ordinary cyclists. Their neat khaki tunics beneath the cartridge-filled bandoliers looked smart and becoming. At 7.15am they were despatched to the scene of coming action in small companies of 40 to 60 men. The motor-cycle section were the leading files and were sent on with all possible speed to locate the position occupied by the enemy. All went well for a time, with the exception of one machine which constantly misfired and in consequence soon lost ground. 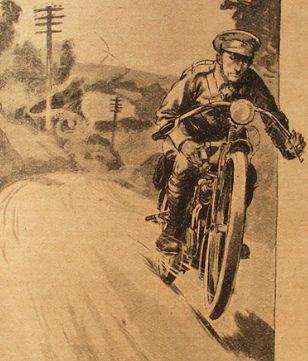 The first 20 miles was covered in 35 minutes. Suddenly above the din of muffled exhausts came the sharp sound of rifle shots, unmistakable close – in fact a bullet entered the oil tank of one fellow’s motor and the hole had to be stopped up temporarily with a lump of clay. A halt was made at once and cover obtained behind a tall, thick hedge at a bend of the road, which spot gave a good view of the road to the right and left. Here a council of war was held to discuss matters.
To proceed further along the road meant certain capture, so one motorist was despatched off to warn the cyclists in the rear, and another four were detailed to scout the neighbourhood on foot.
An hour elapsed before any news of the enemy was forthcoming. At last a despatch came to hand. It was from Jones and ran thus: “200 foreign cyclists with machine guns halting at the 67th milestone on London-Dover main road.” Following this came several more purporting that the enemy had practically laid a line of troops from the South to the North Foreland and were rapidly marching on to Dover, Canterbury and Chatham, sweeping everything and capturing everybody before them. It now remained for these few cyclists to harass the enemy to such a degree that part of our regular army could be brought by motorcars and trains from Aldershot and Salisbury Plain to resist the enemy’s attack on London.
A maxim gun section was hurried off to protect the coastline and road at St Margaret’s Bay. Thanks to the new motor roads, under the direction of the Road Board, punctures were unknown. Other sections were sent to Ashford and on to Faversham. The proportion of combatants was about 150 foreigners to four English. So it was quite obvious that we could not expect to hold out for any length of time.
Presently Jones returned from Canterbury pulling a very long face and limping slightly in the right leg, caused by a stray bullet glancing off a steel pillar and taking a lump of flesh from off his thigh. A bandage was speedily placed over the wound and he resumed his duties with renewed vigour, using his motorcycle whenever possible so as to resume the strain on his injured leg.
Maidstone was made the headquarters of the cyclists and a line of patrols was organized from Chatham on the left to Rye on the right, covering the retreat of the motorcyclists, who now occupied Faversham, Chatham, Ashford, and the little tone of Hythe. The day wore steadily on and all efforts to successfully delay the advance of such overwhelming numbers were useless.
Jones thought for a few moments. “If I could only raise the alarm at Chelmsford and bring the Essex Battalion into action we might be able to give the enemy about ’50 rounds of nickel at dawn’ on the following day.”
Notwithstanding his wounded thigh he approached his commander for the necessary leave of absence. The officer wished him luck and a safe journey, and also hinted at promotion at the termination of the war. A few minutes spent in overhauling and lubricating the motor was thought necessary, and punctually at five o’clock a start was made from a spot five miles west of Canterbury. 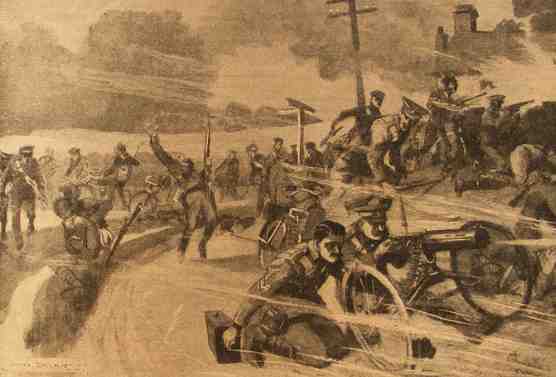 THAT ENDING reflects the social structure of the time – Jones saves the day but even in fiction there was no question of a battlefield commission for a chap from the artisan classes.
Back in the real world, Sir Arthur Conan Doyle sparked off vigorous correspondence in the Daily Express by proposing the formation of “battalions of motors and cycles in place of the present artillery and yeomanry cavalry”.
The Green ‘Un, noting that the great man was “one of the earliest motorcycle enthusiasts who was often to be seen astride his Roc” expressed disappointment that he favoured “the formation of a cycle corps only, when his scheme would appear to more especially appeal to the motorcycling community with patriotic opinions”.
While accepting Sir Arthur’s ideas about using “petrol and steam motors for drawing the bulk of the artillery” Motor Cycling’s correspondent pointed out that cyclists who had just covered 50 or 60 miles could hardly be expected to “fight a battle with a ferocious enemy, arising in all its might after a comfortable night’s rest”. Instead, he asked, “why not motor-bicycle scouts – or even battalions? It is true that a good machine is expensive, but it costs no more than a war-horse, nor does it consume fuel when lying idle… just think which side you would back to win if one army had pedalled themselves 100 miles and the other had arrived at the scene of the action after a comfortable and invigorating spin on their motor-bicycles.”
He pointed out that riders from the volunteer Auto-Cycle Legion had “acquitted themselves splendidly” during recent army manoeuvres”, adding that, unlike horse-mounted cavalry, a motor-bicycle “painted in khaki or some other neutral tint would defy the keenest glasses of the enemy… in an emergency one machine fitted with a carrier could convey two people across country. “And while on this subject the possibility occurs of a motor-cyclist winning the VC for riding up into the danger zone, rescuing a fallen comrade and carrying him off to safety amidst a storm of shot and shell, regardless of his life – and of his tyres!”