ENTREPRENEUR CHARLES Garrard imported 160cc Clement engines which were fitted into bicycle frames by James Norton and marketed as Clement-Garrards. Before long the first Norton motorcycles appeared, also powered by Clement engines and marketed as ‘Energettes’. Adolphe Clement was a bicycle manufacturer who had been working on developing engines since 1897. He also produced pneumatic tyres and owned the French Dunlop patents.

THE COURTS WERE beginning to deal with motoring offences. In Somerset one Alfred Nipper of Weston Super Mare was hauled before the beak summons for the way he wasw riding his 1898 Werner: “Then being the driver of a certain carriage (to wit a motorcycle) on a certain highway there situate called Bristol Road unlawfully did ride the same furiously thereon so as then to endanger the lives and limbs of passengers on the said highway.” He was fined 7/6d; worth about £40 today.

JAMES, WHICH HAD been making bicycles since 1872, fitted FN engines; the first Triumphs and the first Ariels both used 2¼hp Minervas; Brown Bros branched out from parts and accessories into complete bikes marketed under the Vindec banner.

BOSCH LAUNCHED a high-voltage magneto and spark plug. The mag included a condenser which enhanced its reliability. Other technical developments included a water-cooled engine from US manufacturer Steffey; a V-twin engine from Zedel which was used on (French) Griffons; and a practicable drum brake, invented by Louis Renault (a less-sophisticated version had been used by Maybach the previous year).

OTHER NEW MARQUES included Montgomery, Brough (WE, George’s dad), Bradbury (with a 1¾hp  Minerva clip-on engine, from Oldham, Lancs), Simplex (in the Netherlands), Merkel, Metz and Yale (USA) and Victoria (Scotland) – not to be confused with the German Victoria, which was designed by the memorably named Max Frankenburger. In the US Marsh built a 6hp racer that was said to do 60mph.

IF MATCHLESS (which was now fitted with a 2¾hp MMC engine) was making Woolwich famous, the De Dion-engined BAT would do the same for Penge. BAT’s Model No 1 used a 2¾hp De Dion. Did BAT stand for ‘best after test’? That was the firm’s slogan but, more prosaically, the founder was Samuel Batson.

HAVING FINALLY put the Holden into production, Harry Lawson’s Motor Traction Co launched an optimistic ad campaign claiming: “1902 will be a motor bicycle year”. It was indeed, but not theirs. Few pioneers wanted the heavyweight obsolete fours and production ceased.

ERNEST H ARNOTT, Captain of the MCC, was the first rider to complete a timed Land’s End-John o’ Groats run, in 65hr 45min, on a 2hp Werner.  This went a long way towards ending the perception that the motor cycle was a toy. For less determined riders the club arranged a weekend run from London to Brighton and extended an invitation to all motor cyclists to join them. only about a dozen bikes made the trek but this, let it be noted, was the first club run. For a comprehensive review of the End-to-End, six-day and coastal record record rides check out the 1911 Features section.

CLARENDON, JAMES, Quadrant, Bradbury, Rex, New Hudson and Phoenix were among British manufacturers to follow the New Werner’s lead by mounting their engines vertically at the bottom of the frame. Ditto Continentals such as Peugeot, FN and NSU. Light Motors produced a lightweight clip-on engine.

TEMPLE PRESS launched Motor Cycling and Motoring magazine (the first issue was dated 12 February). After a few months the new magazine dropped its motor cycling content to concentrate on cars but Motor Cycling would return in 1909.

FREDERICK SIMMS founded the Society of Motor Manufacturers and Traders and became its first president. Well, it was his idea after all.

ONLY A YEAR AFTER it was set up Belgian firm Sarolea went racing and carried Martin Fagard to victory in the Belgian championship of speed at the Liège velodrome. Fagard went on to run the company.

GEORGE HOLLEY rode one of the motor cycles he and his brother Earl were producing to victory in an endurancer race from Boston to New York. A local newspaper reported: “His control of his machine was superb. Neither mud, dust, sand, ruts, hills nor anything else fazed him. Once when another rider complained of the roads Holley smiled.” Despite their racing successes Holley motorcycles did not sell well so George and Earl switched to cars and began making Longuemare carburettors under licence. Holley carburettors later became hugely successful, producing hundreds of millions of carbs for cars, CVs, boats and aircraft—but not motor cycles.

GLENN CURTIS began manufacturing motorcycles with his own single-cylinder engines. The first bike’s carburetor was adapted from a tomato soup can containing a gauze screen to pull the petrol up by capillary action. And almost immediately the 24-year-old entered the record books for the first time when one of his machines made the fastest time at a Labor Day road race in New York. He was destined to become the fastest man on earth.

“A CURIOSITY IN MOTOR-BICYCLE DESIGN: The machine illustrated is the speciality in motor-bicycles brought out by Motor Wheels, Ltd, Euston Road, London. It departs entirely from convetional practice in design, the whole of the motor gear being carried by the front forks. The motor is a Simms, fitted with magneto ignition, and the drive is by a Crypto gear to the front wheel axle. The petrol tank, carburetter, coul and accumulator are supported on a bracket attachment carried by the forks. A stout flat spring fixed between the handle-bar and stem reduces the vibration considerably. Whether or not a machine of this type would be liable to side-slip badly is a doubtful point.”

“SIR,—YOUR PAPER [MOTOR CYCLING] HAS been a great success, and must have helped many. I notice a contributor says that “two seasons ago the motor-bicycle was almost unknown as a practical and reliable machine.” It may well have been—to him—but it is not true that it was unknown. There were plenty in France, and I myself rode 2,000 miles on my Werner in England in that year—1900. It was very practical and very reliable.
Algernon L Bennett.”

SIR,—AS AN INSTANCE OF ADVANCE in the reliability and simplicity of motorcycles,I thought I would send a few lines to tell you of a capital run I made the other day on a new Singer motor-tricycle. It is exactly 103 miles from my house to this town (Bath) and, leaving at 10am, I actually accomplished this journey with only one stop, that being 51 miles out—for lunch. I therefore made two absolutely non-stop consecutive runs of 51 and 52 miles respectively, each run taking 2¾ hours. I used exactly one gallon of petrol and half a pint of lubricating oil from my oil pump tank. I did not experience so much as a misfire that I could detect, and must say that I have fallen in love with magneto ignition.
W Herbert.”

And here are a selection of the ‘display’ ads that were temptioning enthusiasts that year. 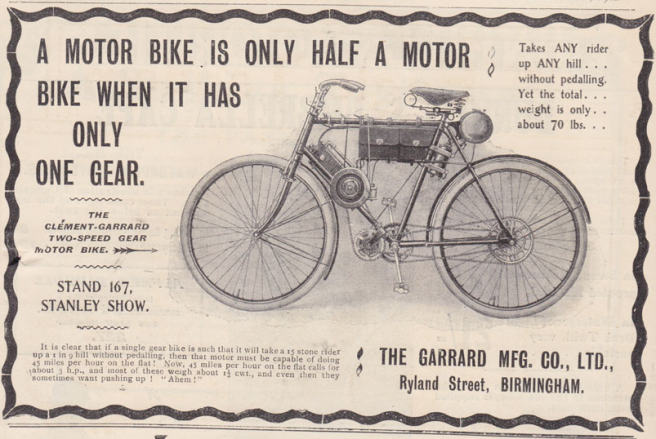 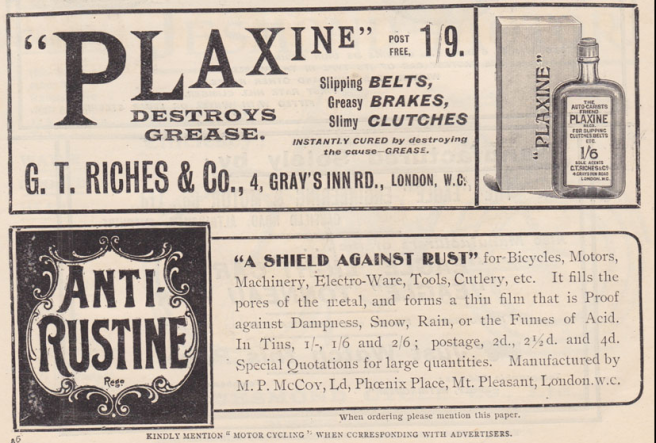 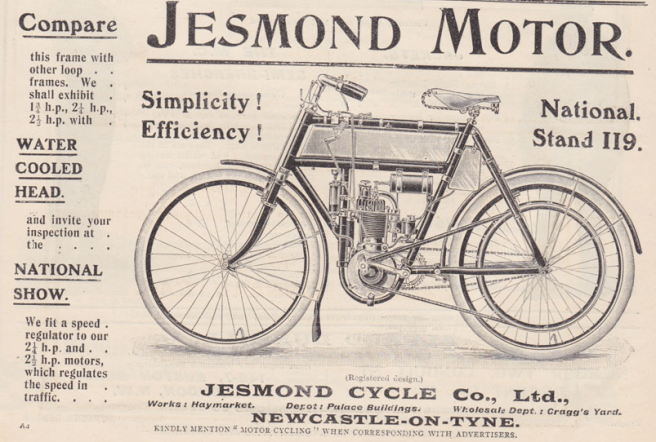