This was a time of non-stop innovation. No sooner had the sidecar appeared than, as the The Motor Cycle reported, Mills & Fulford were investigating ways to improve its handling.

A Novel Sidecarriage Attachment
MESSRS MILLS & FULFORD, who were the pioneers of the motor cycle trailer attachment, and whose sidecarriages and forecars have been so popular during the last year or two, have lately turned their attention to the flexibility of the sidecar attachment, and have patented the idea which we show here. It will be noticed, on reference to the illustrations, that the sidecar occupies a much more forward position than usual in relation to the bicycle. The attachment of the sidecar frame to that of the bicycle is practically the same as those of the rigid pattern which Messrs. Mills and Fulford have previously supplied. 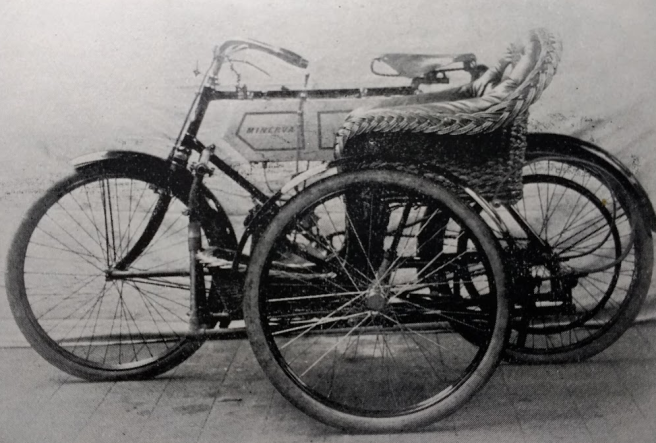 The novel point in connection with the design consists of connecting the sidecar wheel by means of steering rods to the front wheel of the bicycle, which can be clearly seen in our illustration. The makers inform us that they have made several experiments between the rigid sidecar and this pattern, and in every case they found that the rigid attachment required more power to propel it than the new one.
The first question that will be asked is, does not the position of the sidecar wheel necessitate a different turning angle from that to the steering wheel of the bicycle? This has been provided for by the inventors, who have so set out the steering levers that when the front wheel of the bicycle makes a certain curve, the angle of the sidecar wheel describes the exact radius required to follow it without putting any side drags upon the wheel.
After careful examination of this new invention, we think that all those of our readers who have had any experience with the sidecar will agree with us when they see it that this is one of the most practical improvements in sidecar design which has yet been introduced.
We say this all the more confidently from the fact that up to the present the only thing that militates against the growing popularity of this form of motor bicycle attachment is that a certain amount of difficulty is experienced in turning corners, particularly when the side-car is on the inside, this difficulty being, of course, caused by the fact that in the older designs the wheel of the side-carriage has been so fixed that the direction in which it runs is always parallel to that of the rear wheel of the propelling bicycle. 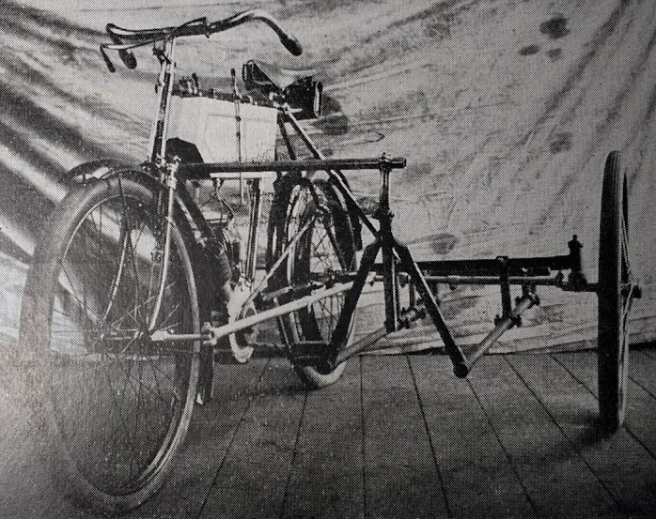